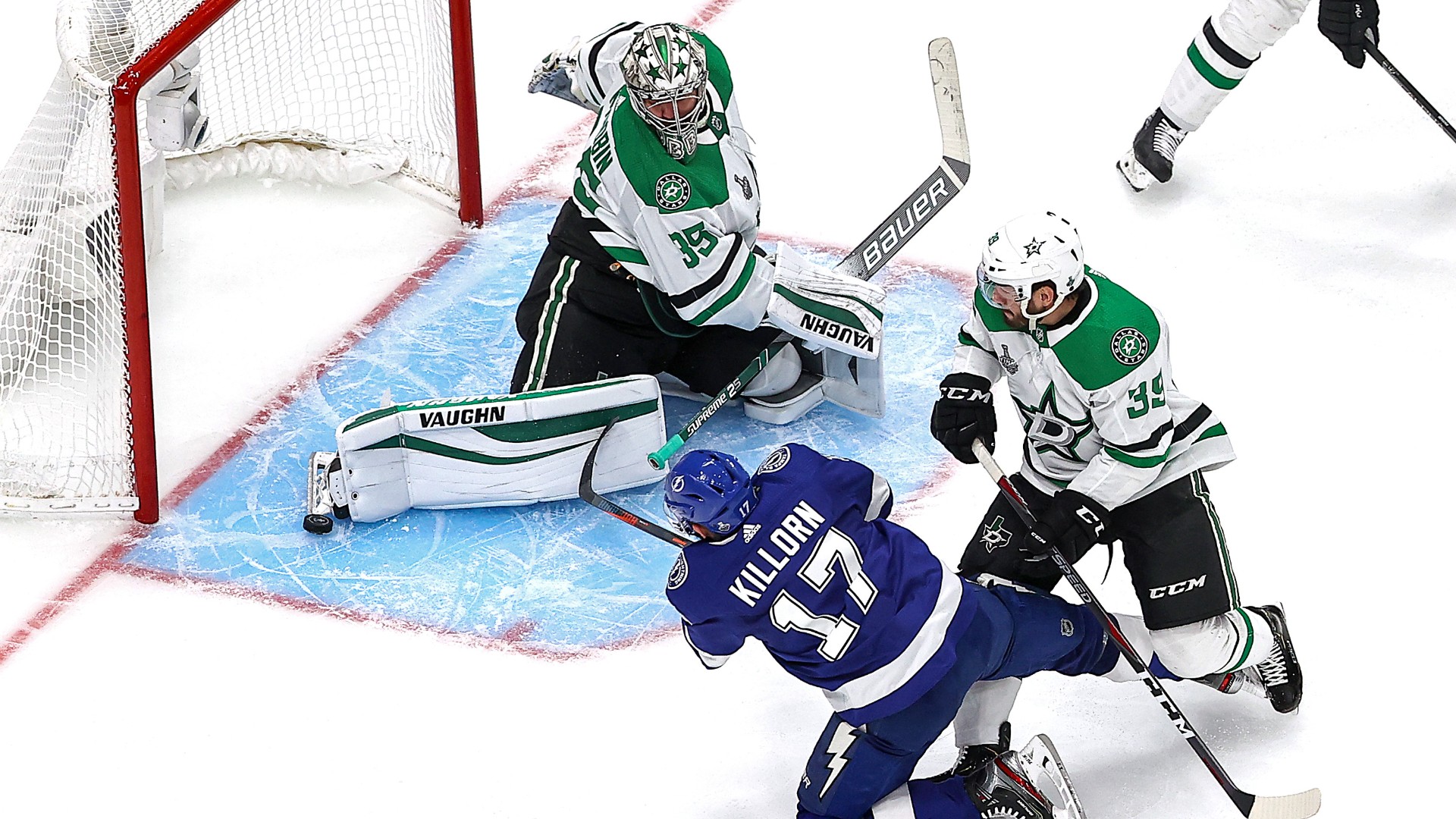 If this was a tweet, it would literally just say: Anton Khudobin.

Because that’s it, that’s the story.

Yes, the Stars had goals from depth players like Joel Hanley and Joel Kiviranta, but when you’re facing a high-powered team like the Lightning in the Stanley Cup Final, you need your goaltender to be at the top of his game. And Khudobin was as he backstopped Dallas to a 4-1 Game 1 victory on Saturday.

“He’s been a rock for us all playoffs,” said Blake Comeau, who had an assist on Jason Dickinson’s empty-netter late in the third. “It was no different tonight and we obviously got into a little bit of penalty trouble there in the third. He was there to bail us out and that’s kind of been the storyline this playoffs. Every time we’ve needed a big save at timely points in the game, he’s been there for us.

“So, we have a lot of confidence in him. He’s playing great for us right now and we’re going to need him to continue that moving forward.”

When the final buzzer sounded, Khudobin had made 35 stops on 36 shots — by the way, his Lightning counterpart, Andrei Vasilevskiy, saw 19 shots (16 saves) — with the one goal coming off a double deflection. A number of those saves should show up toward the top of every Top 10.

“I think his play’s been speaking for itself,” said Jamie Oleksiak, who was credited with the game-winning goal. “Obviously [he has] been great for us and, you know, it looks like whenever he’s out there he’s just having fun and I think we’re feeding off that energy and, like I said, I think he’s been great. I can’t say enough about him.”

Here’s a look at some of those big saves by Khudobin as Dallas is now three wins away from drinking out of the Stanley Cup.

Honestly, not sure how he kept this one out of the net in the second period with Anthony Cirelli on the doorstep. This save kept it a 2-1 game.

In the third period, Tampa Bay ramped up the pressure tenfold.

The Lightning had a 92 Corsi For Percentage, a 88.89 Fenwick For Percentage and a 9-0 Scoring Chances For advantage, plus they outshot the Stars 22-2 in the final frame.

“He does everything he can to stop every shot. When he’s on, which he was tonight, he’s reading the play. So, he’s getting there and anticipating the shot. He’s not late. He’s not chasing the game around. He’s focused on what’s coming, where it’s coming from and he’s meeting the puck. His positional play’s been great. His reads have been great but more importantly than anything, he’s a competitive guy and he’ll do whatever he can to stop the puck and that’s why he’s so effective.”

He took a shot to the mask from 2019 Hart Trophy winner Nikita Kucherov.

Speaking of masks, did you know that Khudobin — nicknamed “Dobby” for obvious reasons — has Dobby from Harry Potter on his mask?

4. Glove save and a beauty

With the Stars leading by two goals and Tampa Bay still turning up the heat, Khudobin made a monster glove stop on Zach Bogosian.

“He’s a very good goalie. When he’s on, he’s on,” Lightning forward Tyler Johnson noted. “I thought we generated some pretty good chances and he made some really big saves. . . . He’s a heck of a goalie, so we’re going to have to make some good plays.”

The Stars lead the best-of-seven series one game to none. Game 2 is scheduled for 8 p.m. ET Monday in Edmonton (NBCSN, Sportsnet, CBC, TVAS).

Khudobin stole Game 1 for the Stars, but he already had alternative plans for capturing the Cup.